Fernando de la Guardia recently celebrated his 31st birthday when he landed at the Oakland Airport in March 1929. Information in the pilot register on the “visiting Spanish pilot” is limited to his name and pilot number; it is unknown where he flew from or went when he left Oakland, what airplane he was flying or who owned the airplane.

Born in Costa Rica, fluent in Spanish and English, and a son of the Costa Rican ambassador to England, during World War I Fernando moved with his family to New York to escape the German Army’s Zeppelin raids. He officially immigrated to the United States in 1920.

By World War II, Fernando and his younger brother, Bernardo, were diplomats at the Inter-American Defense Board (IADB)1 living at the Costa Rican embassy in Washington, D.C. Fernando had a long association with Joaquin Elizalde, working as a rope representative for Elizalde & Company in 1930, and as his guest when he served as the Resident Commissioner of the Commonwealth of the Philippines from 1938 to 1944 (a non-voting member of the House of Representative like Puerto Rico)2. A Joaquin Elizalde party in July 1943 co-hosted by Fernando and Bernardo for IADB delegates got a lot of press in the Washington D.C. papers due to its lavishness during Office of Price Administration3 restrictions. Fernando traveled continuously from his youth to his mid 50s. Records indicate he traveled mostly from NY and Washington D.C. to England, Spain, France, Canada, Mexico, Cuba, the Philippines, Costa Rica, China, and Los Angeles. Many of these trips were likely for diplomatic or business purposes, but some may have been to visit his four siblings. Single throughout his life, Fernando de la Guardia died in 1977.

1Created in the 1942, the IADB, now the oldest existing defense organization in the world, is an international committee of nationally appointed officials working on defense and security facing North, Central and South America.
2The U.S. granted independence to the Philippines in 1946.
3Formed in August 1941 to fight inflation including rents after the start of World War II. 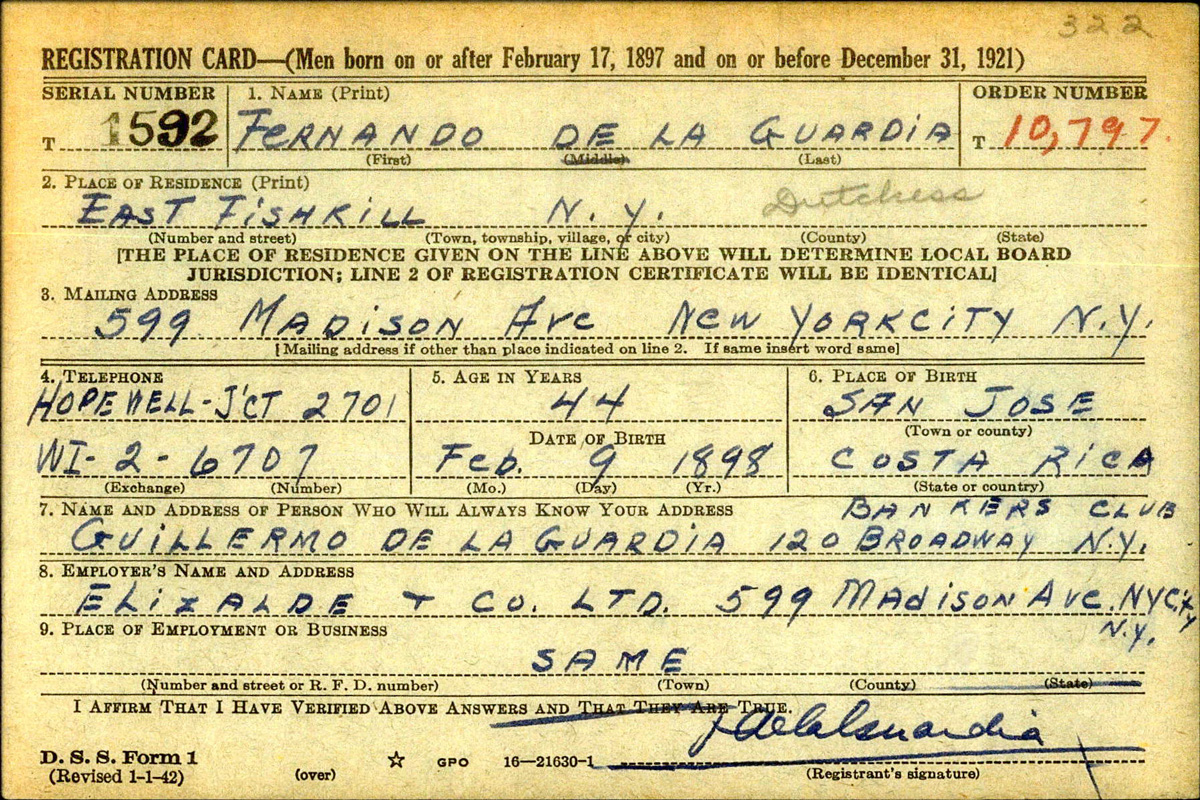