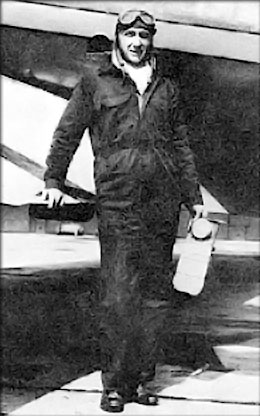 Leslie (L.R.) Tower landed at the Oakland Airport on August 12, 1929, flying a Boeing Sport Pursuit plane. He was the 30th person in the U.S. to receive a transport license.

Born in South Dakota, his father was a farmer before moving the family to the southern end of Flathead Lake, Montana in 1910. Mr. Tower’s interest in aviation started when he spotted a daredevil pilot flying over Flathead Lake in the summer of 1913. After graduating from Polson High School in 1922, Mr. Tower attended the University of Washington where he studied engineering and joined the radio club. Enlisting in the US Army as an aviation cadet he was trained at Brooks and Kelly airfields in Texas and served with the 2nd Bombardment Squadron at Langley Field, VA as a 2nd Lieutenant. In 1925 he joined the engineering branch of the Boeing Company as a draftsperson. (About this time, Mr. Tower’s father, Ralph, became a state senator.) After receiving special Army School training in 1927, Mr. Tower became Boeing’s chief test pilot.

In August 1929, Boeing’s engineering staff, led by Charles N. Monteith, consisted of more than 80 staff working on 58 projects involving 69 aircraft. Mr. Tower would fly virtually every new commercial and military airplane throughout the U.S. and internationally to Japan, Brazil, and Spain including fighter bombers, mail planes, passenger planes, and bombers. Specifically, he tested the first twin-engine all-metal bomber plane with retractable gear and open cockpit, the Boeing B-9, and the Model 247 commercial airliner.

On July 18, 1934, the US Army Air Corps released US Army No. 98-201 specification calling for a multi-engine bomber plane with double the bomb load and range of the Army’s standard bomber, the Martin B-10, to reinforce air forces in Hawaii, Panama, and Alaska. The plane needed a useful bomb load at an altitude of 10,000 feet for ten hours with a top speed of at least 200 mph. Specifications included 200-220 mph at 10,000 feet, 170-220 mph operating speed at 10,000 feet, an endurance of 6-10 hours at operating speed, and a service ceiling of 20-25,000 feet. Aircraft builders had twelve months to design, construct and test their bomber planes. Three companies joined the competition: Boeing, Douglas, and Martin.

Boeing’s Project No. 299 started design in June 1934 with construction starting in August 1934. The plane was designed to carry a 2,000-pound bomb a distance of 2,000 miles at a speed > 200 mph, and included an enclosed, heated, soundproof, and comfortable cockpit needed for long-range operation, automatic pilot controls, retractable landing gear, and motors streamlined in the wing. Boeing’s design went beyond the US Army’s specifications for speed and maneuverability. Maneuverability, or lack thereof, would prove to be its fatal downfall.

Mr. Tower was at the controls for the Model 299’s 2,100-mile maiden flight from Seattle, WA to Dayton, Ohio on July 28, 1935. After 9 hours and 5 minutes, Mr. Tower arrived 15 minutes early using 63% of the 3000 available horsepower from four Pratt and Whitney engines. Hundreds of people visited Wright Field to observe the bomber plane competition and there was widespread public interest in newspapers throughout the U.S. during the Air Corps operational tests of Boeing’s Model 299, Martin’s upgraded B-10, and Douglas’ B-18. 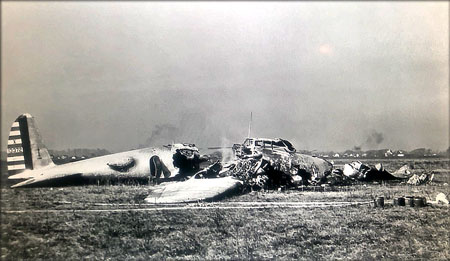 On October 30, 1935, Major Ployer P. Hill, Chief of the Flying Branch at Wright Field, and Lieutenant Donald L. Putt, both members of the Army Flight Test Section, tested the Boeing Model 299 with four crew. At the last minute, Mr. Tower was invited to fly as a civilian observer. Standing between the pilot and co-pilot at take-off he soon realized there was a problem when the bomber’s nose went up higher than normal. Realizing that no one disengaged the locking mechanism inside the cockpit, he tried but was unable to get to it in time. At 300 feet, the plane stalled, turned 180 degrees, landed on its left wing, and burst into flames.

Mr. Tower was pulled unconscious and severely burned out of the plane’s smashed windshield. The pilot was killed, but the co-pilot and crew crawled from the wreckage. First-hand accounts of the accident were provided by Mr. Tower after he regained consciousness, the crew, and eyewitnesses on the ground. Mr. Tower appeared to recover and received a blood transfusion, but took a turn for the worse. He died three weeks after the crash on November 19, 1935, at age 32. 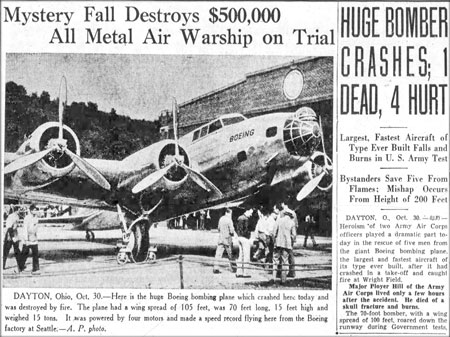 An aerial escort accompanied Mr. Tower’s body to the train in Dayton, Ohio and Charles N. Monteith, Boeing’s chief engineer, joined the procession from Dayton to Polson, Montana. More than 300 people attended the funeral. A memorial plaque for Leslie Tower may be viewed at the Polson-Flathead Historical Museum in Montana.

Due to the seriousness of this accident, the US Army conducted an investigation by a Board of Officers. The Board confirmed that the crew neglected to disengage the gust lock to prevent wind from moving the plane when parked. Specifically, the elevator was locked in the “up” position. (Had the elevator been locked in the “down” position the plane could not have taken off.)

Boeing was disqualified from the bomber competition, and the Air Corps declared Douglas the winner with its two-engine B-18 Bolo. However, due to its superior design, the US Army would soon order 13 Model 299s (the prototype for the B-17 bomber) and provide 12,730 B-17s (also known as the Flying Fortress) for World War II. The tragic death of Leslie Tower, and the destruction of the Model 299, resulted in US Army personnel developing checklists for takeoff, flight, before landing, and after landing, and checklists became the norm to improve safety for aircraft operations as well as many other disciplines.